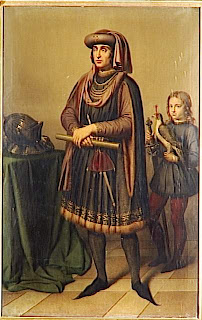 Of the great battle captains under Jeanne d'Arc, Étienne de Vignolles is one of the toughest and most warlike. A professional soldier of some repute, La Hire was present at the lifting of the Siege of Orleans, and was the primary leader at the Battle of Patay which caused as much damage to the English as Agincourt did to the French.

Étienne de Vignolles, called La Hire, was a Gascon captain (renowned for their short temper) and Bailly of Vermandois. He was born about 1390 and entered the Dauphin's service about 1418 and waged guerilla warfare in the country around Laon and in Vermandois. He was captain of Château Thierry in 1421 and then of Vitry in Champagne in 1422.

He was seriously wounded at Saint Riquier and remained lame. He commanded the Lombard knights at Verneuil (August, 1424) and delivered Vendôme from Suffolk, succored Montargis in 1427, surprised Marchenoir but let the English retake Le Mans. He undertook the reprovisioning of Orléans which he entered on October 25, 1428. At the Battle of the Herrings, La Hire protected the retreat of the French companies; he encountered the Maid at Blois and reëntered Orléans with her on April 29, 1429. He prosecuted the whole campaign of Beauce and commanded the forces that escorted Jeanne and the King on the journey to Reims.

Created Bailly of Vermandois, he installed himself at Laon. But we encounter him shortly afterwards in Normandy, of which he was captain-general after the taking of Louviers (1429). He conducted two mysterious enterprises which appear to have had as their object the deliverance of Jeanne d'Arc from Rouen. But he was captured by the Burgundians who held him for a ransom of 1,500 réaux d'or and kept him prisoner at Dourdan.

In September, 1432, la Hire appeared at Lagny, which was besieged by Bedford, and he ravaged the lands of the Duke of Burgundy around Cambrai the following year. Captain-general of the hither side of the Seine, in December, 1433, he took Ham and Breteuil from the Burgundians and defeated the Earl of Arundel at Gerberoy (1435).

In spite of the peace of Arras he continued to wage guerrilla warfare in Artois, around Caux, but he was taken prisoner by the Lord of Offémont at Beauvais (1437). In the service of René d'Anjou, La Hire led the Écorcheurs (2) in Lorraine (1438-1439). He took part in the sieges of Harfleur and Pontoise, and in the battle of Tartas.

Le Hire is remembered today as the Jack of Hearts in card decks. 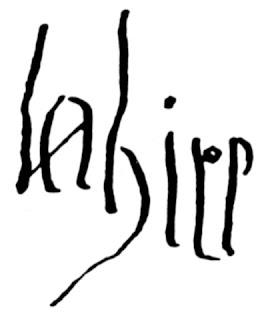