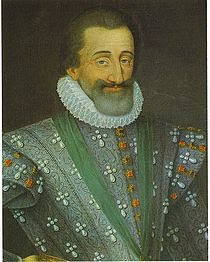 It was on this day in 1610 that Good King Henri was assassinated.

As a Huguenot, Henry was involved in the Wars of Religion before ascending the throne in 1589. Before his coronation as king of France at Chartres, he changed his faith from Calvinism to Catholicism and, in 1598, he enacted the Edict of Nantes, which guaranteed religious liberties to the Protestants and thereby effectively ended the civil war. One of the most popular French kings, both during and after his reign, Henry showed great care for the welfare of his subjects and displayed an unusual religious tolerance for the time. He was assassinated by a fanatical Catholic, François Ravaillac.

Henry was nicknamed Henry the Great (Henri le Grand), and in France is also called le bon roi Henri ("the good king Henry") or le Vert galant ("the Green gallant"), a reference to both his dashing character and his attractiveness to women. In English he is most often referred to as Henry of Navarre. He also gave his name to the Henry IV style of architecture, which he patronised. He is the eponymous subject of the royal anthem of France,"Marche Henri IV".

The regicide, François Ravaillac claimed to have experienced a vision in 1609 sending him to convince King Henry IV to convert the Protestant Huguenots to Catholicism. From the period of Pentecost 1609 and May 1610 he made three trips to the capital with the intent of Unveiling his vision to the king. he was never able to meet the king and he interpreted the decision to invade the Spanish Netherlands (Belgium) as the beginning phase of a war against the papacy.

He became increasingly determined to kill King Henry. On 14 May 1610, he waited in ambush on the Rue de la Ferronnerie in Paris, and when the king passed, his carriage was halted was stopped by a comotion in the street. Ravaillac jumped into the carriage and stabbed King Henry to death. He was immediately captured and taken to the Conciergerie.

Ravaillac met a fearsome death, he was scalded with burning sulphur, molten lead, boiling oil and resin, his flesh then being torn by pincers. he was then ripped apart by for horses.

Henri was well loved by his subjects. He ended the costly wars with the nobility by buying them off instead going to war. He truly cared for the welfare of his subjects, and is reputedly quoted as saying, "...If God spares me, I will ensure that there is no working man in my kingdom who does not have the means to have a chicken in the pot every Sunday!.."*

Louis XX is his direct descendant through Louis XIII.

A celebration of his life may be found here. A really good site, albiet in French.

For a short post which reads as though she was there(?) go here...

A very unfortunate anniversary. I like the anthem, though. It seems to me that the same melody (although at a slower tempo) is used for the "Apotheose" at the end of Sleeping Beauty. I guess Tchaikovsky borrowed it from the Marche Henri IV?

He certainly would have known it. The 1812 overture begins with God save the Tsar.