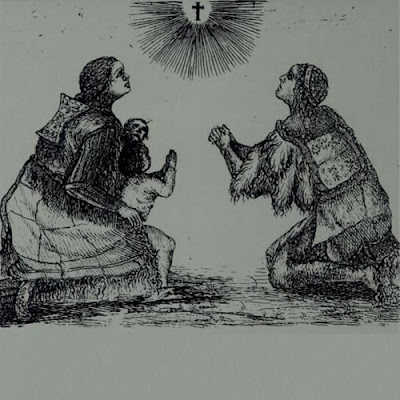 If we were to be so privileged as to be transported back in time to a typical Jesuit mission in New France on Easter we might hear this motet.

...This very beautiful "motet" is typical of the sort of music heard at various Abenaki missions in New France before the Fall of Quebec in 1759. The music is taken from a variety of known sources including works by André Campra and Henry Du Mont (1610-1684). The sacred text of Haec dies drawn from Psalm 117 and is associated with liturgical rites that celebrate the feast-day of Easter...

Music and partial narritive borrowed from the Deerfield 1704 museum site.

Saint Francois-de-Sales mission, called St Francis, was attacked by Rogers Rangers during the French and Indian War in October 1759. Ranger claims of 300 killed were probably exagerated, the French claimed the Rangers killed 30, mostly women and defenseless children, besides burning the foodstuffs for the upcoming winter. The attack was fictionalized in a 1937 book, Northwest Passage, by Kenneth Roberts.
Posted by Brantigny at 4:14 PM