"There is nothing new except what is forgotten." 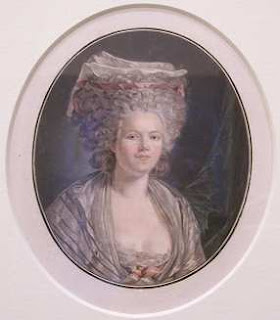 The Coco Chanel of the 18th century, Rose Bertin...

Called the "Minister of Fashion" by her detractors, Bertin was the mind behind almost every new dress commissioned by the Queen. Dresses and hair became Marie Antoinette's personal expression vehicles, and Bertin clothed the Queen from 1770 until her dethronement in 1792. Bertin became a powerful figure at court, and she witnessed--and sometimes effected--profound changes in French society. Her large, ostentatious gowns ensured that their wearer took at least three times as much space as her male counterpart, thus making the female figure an imposing, not passive, presence. Her creations also established France as the center of the fashion industry, and from then on, dresses made in Paris were sent to London, Venice, Vienna, St. Petersburg and Constantinople. The inimitable Parisian elegance established the worldwide reputation of French couture.

Thanks to Anabel at Trianon de la Reina, who posts from her home in La Plata, Buenos Aires, Argentina. Her article on Rose is here. Her blog is written in Spanish.
Merci Anabel!
Vive le Roy, Vive Louis!
Brantigny
The name of the article is her quote...
Posted by Brantigny at 1:57 PM