Travel In Paris in the 18th Century

From Lauren, comes an article about traveling through the city of Paris in the 18th century. The Paris of today is not the Paris of then, the streets were closer together for one and there really was no police force to speak of...

Paris Travel: To Cab or Not to Cab? 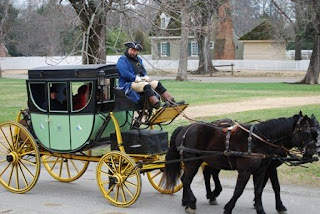 If you were visiting Paris in the 18th century, you would be in luck! It was possible to navigate the city by purchasing maps and following the clearly labeled streets. (Street names were carved into the buildings on corners.) Of course it was not a very wise idea to walk, as it was dangerous and dusty. The economical way to travel would be renting a cab!

Cabs were great because they were a steal at 1 livre 10 sous/hour! The cab system in Paris was pretty well pulled together. Every cab was numbered. There was a central station where you could go in case you lost items on the ride, and they were usually there! necessaires, feathers, corsets...

The only cons of a cab were that they were not very safe. One might get that rush in their stomachs wondering "did I make the right choice" after the cab has taken off. If you are not second guessing whether or not you should have rented a coach, and a little danger doesn't bother you, then the only other thing you would have to get past is the lack of cleanliness! (grimy!) And I am not talking dust here. These cabs were infamous for being just filthy. But cheap and quick. Your call!

Lost corsets! Mon Dieu! What were they doing in those cabriolets?

Whew! Thanks and a tip of the beret to Lauren, who follows my blog.

Have you heard about Peterman's Eye Travel? J. Peterman wrote about Paris today and I thought I'd share....his community is a wonderful place for curious minds!