Prince Harry and the Paki remark

Theodore Harvey has posted an article on Prince Harry and his remark about his "paki" comrade. If you click on his name you will be able to read it. His commenter's seem to agree with him that he was just joking. My take is somewhat different. 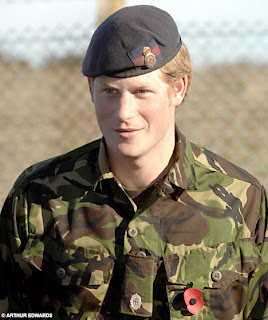 My opinion is this, a true Prince of the Blood would not have made such a remark to begin with. Having served in the military for 22+ years I have had and made my share of barracks room joking.
Still it seems inconceivable that I should call an African-American fellow Marine a N****r, or a Mexican American a S**c. What is more I would not have put up with an peer or subordinate saying any racially motivated remark, whether in jest or otherwise. I don't know of any person in a leadership position in any service who feel differently. It is just not done.

Prince Harry is an Officer. It is not the PC police who should have served him a reprimand it should be his Commanding Officer. It reflects a serious problem in a supposed Monarchy, that is the "Leveling" of the Royal Army.

If this would have happened in my last unit this officer would be looking for a job. I have seen officers cashiered for less. Officers need to be held to a higher standard, and princes higher yet.

"Duty is the most sublime word in our language. Do your duty in all things, no man can do more, he should never wish to do less..."