Protestants often say we Catholics worship Saints. Very wrong but you can't convice someone whose mind is made up.

St Joseph of Cupertino whose feast is celebrated today is a very special patron of mine. As a Marine I was assigned to Helicopter Squadrons on both coasts and in the far east. St Joseph is very special to me because he is the patron saint of helicopters. 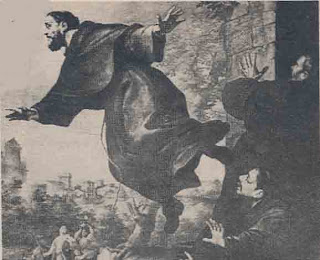 "...In the local calendar for Southwark, today is the feast of St Edith of Kemsing (where she was born), often known also as St Edith of Wilton (where she was a religious).In the 1962 calendar is is the feast of St Joseph of Cupertino, a Franciscan who is much loved for the tragi-comic and utterly Franciscan character of his life, particularly his flying. EWTN has the article by Alban Goodier SJ: "St Joseph of Cupertino: the dunce. 1603-1663" from his book "Saints for Sinners" book. (I loved the story about the time the shepherds did not turn up to the little chapel for devotions so he called the sheep over to join him in the Litany of Loreto.) The title of Goodier's article refers to St Joseph's inability to study and the providential help that was given him at his examinations. Hence, in addition to being a patron saint of aviators, he is invoked by nervous students before their exams. this prayer is commonly used:

O Great St. Joseph of Cupertino who while on earth did obtain from God the grace to be asked at your examination only the questions you knew, obtain for me a like favour in the examinations for which I am now preparing. In return I promise to make you known and cause you to be invoked. Through Christ our Lord. Amen.St. Joseph of Cupertino, Pray for us.