I was directed to a blog which I had previously not known, "St. Robert Bellarmine: Controversies & Secrets. . ." authored by John Michael. I present an article suggested at Good Jesuit, Bad Jesuit, the blog of my friend Joseph Fromm. John Michael guarantees "that this site will be free from doctrinal errors, faithful to the Magisterium and to all of Her teachings on Faith and Morals..."

Being a great orator, Saint Robert Bellarmine loved to make analogies. When I mean great, I truly believe that is an understatement. Thousands would listen to his sermons. Every sermon produced a true conversion to the Faith. Immoral people did an about face and rejected worldly pleasures so they could live a life of service to God.

Here is an excerpt from a St. Bellarmine's sermon calling men frogs. 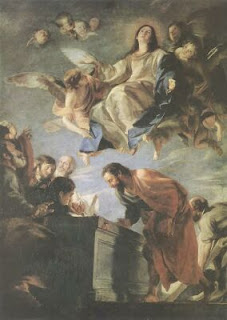 "You have doubtless seen, dear brethren, how little boys fish for frogs in some stagnant pool. They tie a bit of skin taken from a frog already captured and then throw it out as a bait for other frogs. Up rushes the best swimmer in the pool and seizes the skin with all its might, though quite incapable of either gnawing or swallowing it. On this, the fisherman immediately jerks in his line with the frog attached, drags the bait violently out of its mouth and tosses it back to the other expectant victims. And so he continues until he has enough dead frogs by him to satisfy his immediate needs.

Is not this an accurate picture of human gullibility? Men are so like frogs. They grab at things which they cannot use or keep, and that wily angler the devil knows how to capture multitudes of them with some single and sorry piece of bait such as a few acres of land or a wooden chair which we call a throne. Kings come and kings go, but the throne remains, having damned perhaps the majority of its occupants..."

Thanks and a hat tip to John Michael and Joseph Fromm.

Dieu le Roy.
de Brantigny
Posted by Brantigny at 8:23 AM