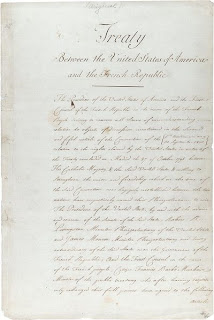 The Louisiana territory's borders were considered to be the tributaries of the Mississippi, This comprised an area that would eventually become 15 states and portions of 2 Canadian provinces. These Canadian areas were ceded to Great Britain in 1818 in the Anglo-American convention.

Jefferson as a strict constitutional constructionist believed the purchase to be unconstitutional because he could find no part of the constitution wherein the acquisition of lands could be made by a president. Moreover he felt that it could erode the powers of the various states by the federal government. On the other hand Jefferson feared that a strong presence of France as a western neighbor would endanged the American trade in New Orleans.

Originally the Jefferson was prepared to negoitiate soley for the City of New Orleans, and offered 10 millions of dollars. The negotiators were flabergasted when they were approached with an offer for the entire Louisiana Territory for 15 millions.

The lands were almost entirely occupied by indians, necessitating the need for the United States to re-negotiate with each individual tribe, few if any indians knew that their lands were now the property of the United States. The purchase price of the lands from the indians, and the wars that ensued made the price considerably higher than the original purchase.