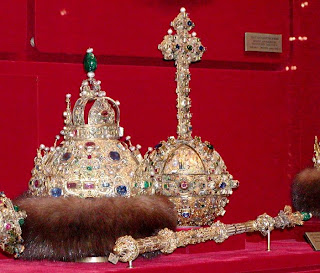 By 1613, when Michael Romanov, the first Tsar of the Romanov Dynasty was crowned, the Russian regalia included a pectoral cross, a golden chain, barmas (wide ceremonial collar), the Crown of Monomakh, sceptre and orb. Over the centuries, various Tsars had fashioned their own private crowns, modeled for the most part after the Crown of Monomakh, but these were for personal use and not for the coronation.

In 1719, Tsar Peter I "the Great" founded the earliest version of what we now know as the State Diamond Fund of the Russian Federation. Peter had visited other European nations, and introduced many innovations to Russia, one of which was the creation of a permanent fund (фонд) to house a collection of jewels which belonged not to the Romanov family, but to the Russian State. Peter placed all of the regalia in this fund and declared that the state holdings were inviolate, and could not be altered, sold, or given away - and he also decreed that each subsequent Emperor or Empress should leave a certain number of pieces acquired during their reign to the State, for the permanent glory of the Russian Empire.

From this collection came a new set of regalia, including eventually the Great Imperial Crown, to replace the Crown of Monomakh and other crowns used by earlier Russian Tsars and Grand Princes of Muscovy, as a symbol of the adoption of the new title of Emperor (1721).

After the Tsar recited the Nicene Creed as a profession of faith, and after an invocation of the Holy Ghost and a litany, the emperor assumed the purple chlamys, and the crown was then presented to him.

He would take it and place it on his head himself, while the Metropolitan recited: "In the name of the Father, and of the Son, and of the Holy Spirit, Amen."

The Metropolitan would then make the following short address:
"Most God-fearing, absolute, and mighty Lord, Tsar of all the Russias, this visible and tangible adornment of thy head is an eloquent symbol that thou, as the head of the whole Russian people, art invisibly crowned by the King of kings, Christ, with a most ample blessing, seeing that He bestows upon thee entire authority over His people."

The last occasion on which the Great Imperial Crown was officially used was the State Opening of the Duma in 1906.

An a capella version of the Tsarist anthem.

Posted by Brantigny at 1:25 PM