I thought that as today is the 89th anniversary of the suspension of the Austia-Hungarian Empire as the Austro-Hungarian Imperial and Royal Family arrived at the Austro-Swiss border in an Imperial train and departed Austria, that it would not be amiss to present the Imperial Crown of Austria.
more 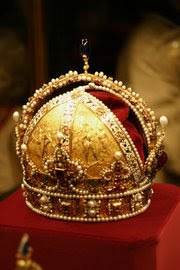 Crown of the Austrian Empire

Because the Imperial Regalia of the Holy Roman Empire, especially the Imperial Crown, were all kept in Nürnberg and could only leave the city for the coronation, some rulers had their own personal crowns made. For example, when they attended a session of the Reichstag (Imperial Diet), they attended with their own crowns. The oldest depiction of such a private crown is an etching by the artist Albrecht Dürer of Emperor Maximilian I, where a depiction of a crown is seen that might have influenced the appearance of the crown of Rudolf later.

The Imperial Crown was actually never used for a coronation, since the Empire of Austria, as opposed to the Holy Roman Empire, was a hereditary monarchy under the Habsburg Dynasty, and therefore such an act of legitimization was not seen as necessary. The ceremony was more an act of investiture on the monarch's official ascension to the throne.

The crown of Rudolf II was made in 1602 in Prague by Jan Vermeyen, one of the most outstanding goldsmiths of his time, who was called specially from Antwerp. The crown is made out of three parts: the circlet (Kronreif), the high arch (Kronbügel), and a mitre (Mitra). It therefore follows the model of the mitral crowns, which derive their shape from the cap of bishops.

Francis I, the first emperor of Austria, wearing the Austrian Imperial Crown and regalia

The circlet in itself forms a crown — the mitre and the high arch were put in extra, so to speak. It symbolises the royal authority. Out of it rise eight lilies, which were probably inspired by the Bohemian Crown of St. Wenceslas. The lilies are also sometimes associated with the fleurs-de-lis of the Valois. The numeral eight is a theme that was also taken from the Imperial Crown of the Holy Roman Empire, since the circlet is made out of eight plates. In the circlet are precious stones such as spinels, zircons, and pearls. The zircons are cut in such a way that they are flat at the front. The cutting of precious stones was back then a relatively new technique.

The mitre symbolises the divine right to rule, and the spiritual position of the emperor: during the coronation, he was also consecrated symbolically as a deacon. It is turned by 90 °, the areas are shown to the side, so that the high arch goes from the front to the back, just as in the Imperial Crown of the Holy Roman Empire. The mitre is made out of gold, with a band of enamel work, which depicts birds and plants. The mitre is divided into four sections, which represent the high honours of Rudolf II. The first part shows him kneeling, while receiving the Imperial Crown of the Holy Roman Empire in Regensburg as Holy Roman Emperor. The second shows him riding onto the coronation hill in Bratislava during his coronation as King of Hungary. The third shows his coronation procession through Prague as King of Bohemia, and the fourth depicts an allegory of his victory over the invading Turks, although historically that is not quite correct. The inscription inside the arch reads in Latin: RVDOLPHVS II ROM(ANORVM) IMP(ERATOR) AVGVSTUS HVNG(ARIAE) ET BOH(EMIAE) REX CONSTRVXIT MDCII (Made for Rudolf II, Roman Emperor, King of Hungary and Bohemia, in 1602).

The high arch was obviously inspired by the arch from the Imperial Crown of the Holy Roman Empire. It is studded with eight diamonds, which symbolise Christ. The emperor was regarded as governor on earth in the name of Christ. At the top of the arch is a blue-green emerald, which symbolises heaven. The emerald was not cut, but polished.

Sceptre and Orb and Imperial Crown of Austria

Also belonging to the crown are a sceptre and the Imperial Orb, which was commissioned in 1612 by Rudolf's brother and successor Matthias. It was created by Andreas Ochsenbruck. The shape takes its inspiration from the crown, especially the enamel-work has been copied in its style. A peculiarity of the sceptre is that it is made partly out of "unicorn horn". The sceptre and the orb were already in use before proclamation of the Empire of Austria, sometimes as the Bohemian royal regalia, sometimes for the hereditary private estates (Erbhuldigung) of the Archduchy of Austria.

The crown, sceptre, and orb are kept today in the Schatzkammer Imperial Treasury, in the Hofburg Palace in Vienna, Austria.

An iteresting article from 1921 may be found here...

Photos of the last Emperor and Empress may be found here...

Information on the jewels and exhibits may be found here...

Thanks and a tip of the beret to J.K. Baltzersen for keeping my dates straight.

Sir, the source has been updated.